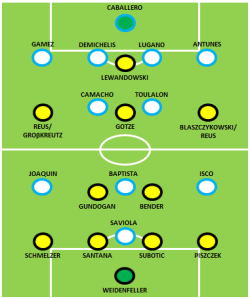 Borussia Dortmund manager Jurgen Klopp will decide on the fitness of captain Jakub Blaszczykowski for the second leg against Malaga. The winger’s creativity has been missed in recent weeks, with Kevin Groβkreutz offering a more predictable threat. Should Blaszczykowski return to the side it would allow Marco Reus to switch back to his customary left-sided role from where he can cut infield onto his stronger right foot. Elsewhere Sven Bender is likely to replace Sebastian Kehl in midfield after a disappointing first leg performance, but Mats Hummels is still returning to full fitness.

Malaga are without the suspended Weligton in defence, so Diego Lugano will probably come in ahead of Oguchi Onyewu. Javier Saviola’s energetic display in the first leg should ensure he keeps his place in attack ahead of Roque Santa Cruz.

Dortmund will still be frustrated that they left Malaga without an away goal despite a dominating performance, so Manuel Pellegrini will know that an away goal will give the Spanish side a large advantage. He will be aware however that Dortmund were not at their best last week, and Klopp will hope that Bender and Blaszczykowski can add some fluency to the home side’s midfield. With no great tactical changes expected from the first leg (a preview of which can be found here), analysis will focus on what will be decisive second time around… (Read more)