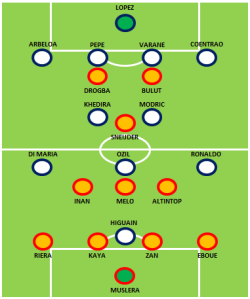 A suspension to Buruk Yilmaz robs Fatih Terim of his top scorer, so Galatasaray will pair Umut Bulut alongside Didier Drogba in attack. With both Tomas Ujfalusi (injured) and Dany Nounkeu (suspended) missing in defence Gokhan Zan should come in alongside Semih Kaya.

Jose Mourinho is without the suspended Sergio Ramos and Xabi Alonso – although how upset he will be about that is debatable. Pepe and Luka Modric should come in. Otherwise Real Madrid should start their first choice side, but expect key players to be removed if the tie is wrapped up with an early away goal.

Few would deny this tie is over, but a tactical contest still remains. Terim attempted an ambitious and aggressive policy in the first leg that left Galatasaray vulnerable at the back and they paid the price. For this game he somehow needs to adjust his system to become more solid, yet find at least three goals. Madrid will play their usual way and expect to kill the game by half time… (Read more) 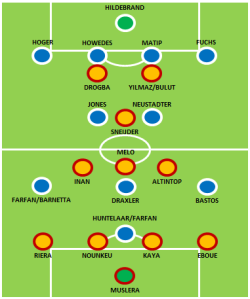 The signings of Didier Drogba and Wesley Sneijder have undoubtedly given this tie a degree of intrigue. Schalke were certainly pleased with the draw back in December, but a poor run of form and their opponent’s transfer activity has certainly dampened their confidence.

The Turkish side used a standard 4-4-2 system in the group stage but Fatih Terim has openly questioned how best to use his new stars, especially Sneijder, a playmaker that has become increasingly limited in his positioning. Galatasaray appear to have two options – slot Sneijder and Drogba into the side in place of forwards Burak Yilmaz and Umut Bulut to form a 4-4-1-1 shape, or sacrifice the wide midfielders in favour of a 4-3-1-2 system. Schalke will continue with a 4-2-3-1 system, but Jens Keller will hope that Klaas-Jan Huntelaar recovers from injury to lead the line to allow Jefferson Farfan to return to a right-sided role. The signing of Michel Bastos has allowed Julian Draxler to replace Lewis Holtby in the central playmaking position.

With Galatasaray’s approach so uncertain, both tactical options open to Terim will be analysed… (Read more)