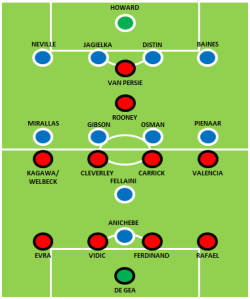 Considering how Manchester United were outmuscled in midfield by Everton earlier in the season and the poor form of his natural wingers, Sir Alex Ferguson could reintroduce his diamond midfield against Everton with Wayne Rooney behind two forwards. However, given that the league leaders are at home and are unbeaten in 13 league games Ferguson will probably keep faith with his customary 4-4-2/4-4-1-1 shape. Everton came back from 3-1 down to Aston Villa last weekend after switching to two forwards in a 4-4-2 but David Moyes is likely to start with Marouane Fellaini behind a lone striker – assuming he passes a late fitness test – from where the Belgian scored the winner against United in August. United and Everton have played out some incredible games in recent years, largely owing to the use of similar systems but with vastly opposing styles… (Read more)

It is often the case that the departure of a key player can actually provide a team with the opportunity to adapt its style of play and improve as a result. Tim Cahill may be in decline and had his weakest season as an Everton player last year (his return of three goals was his lowest in eight years) but he still featured in thirty-five league games in his position behind the striker. Cahill’s importance to the team has always been through the number of goals he scores so it was not a great surprise to see him leave for the MLS… (Read more)

Error: Twitter did not respond. Please wait a few minutes and refresh this page.